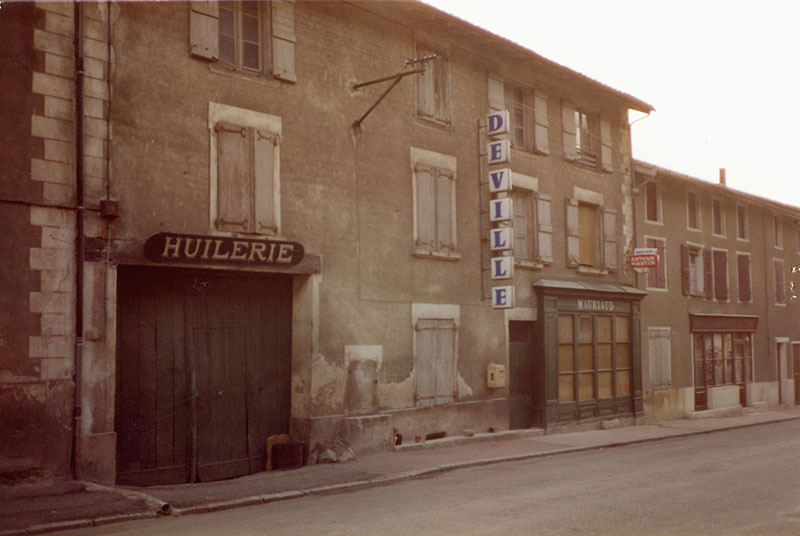 Since the day I was born in 1880, the mill that I am has undergone many metamorphoses that I’ve never had the chance to put into words. I have no desire to blow hot air, but I felt that it was time to speak out. 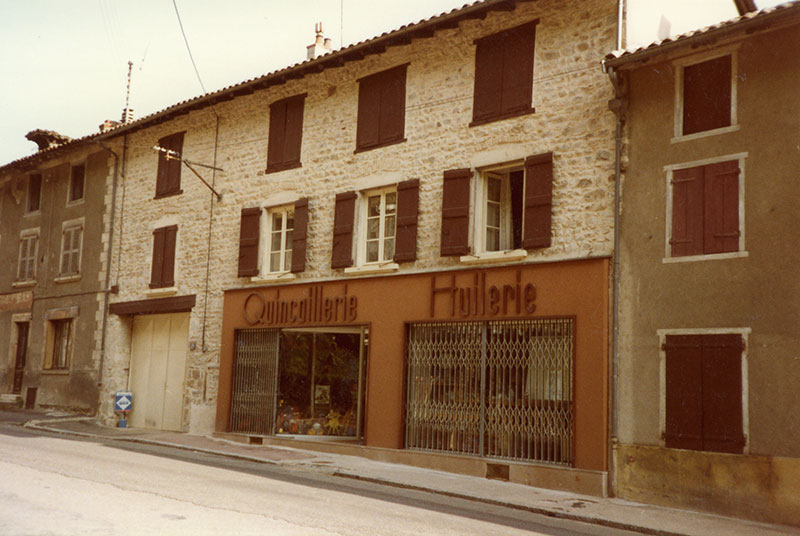 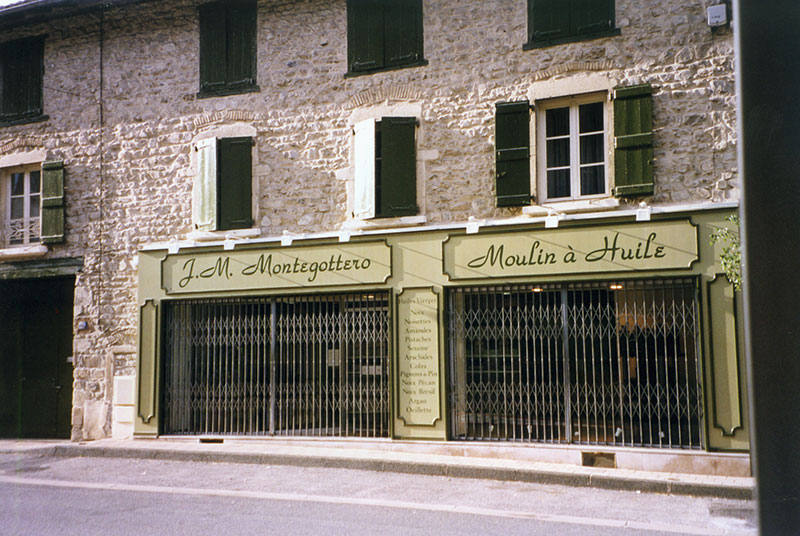 So much oil has flowed through my presses that it might be fun to apply a few drops to the door hinges of my memory. Much as I may recall eras and circumstances, I’m not one of those neat little structures whose history gets recorded in a notebook. My volumes remain veiled in mystery, some say that my cellars lie alongside dungeons, and I like to think that I owe my charm to those little legends too. My walls have vibrated under the weight of the millstone, my floors have resounded under the iron-clad hooves of the mounted police; they have even been beaten over repeatedly by ironmongers’ shoes. The horse-drawn carts that brought deliveries were replaced by trucks, the electricity fairy visited my abode, yet I must admit that more than anything else, I’ve kept operating thanks to sheer elbow grease and a sense of effort that has never dulled. And quite frankly, when the Montegottero family settled under my roof, I knew right from the start that its members belonged in that league. 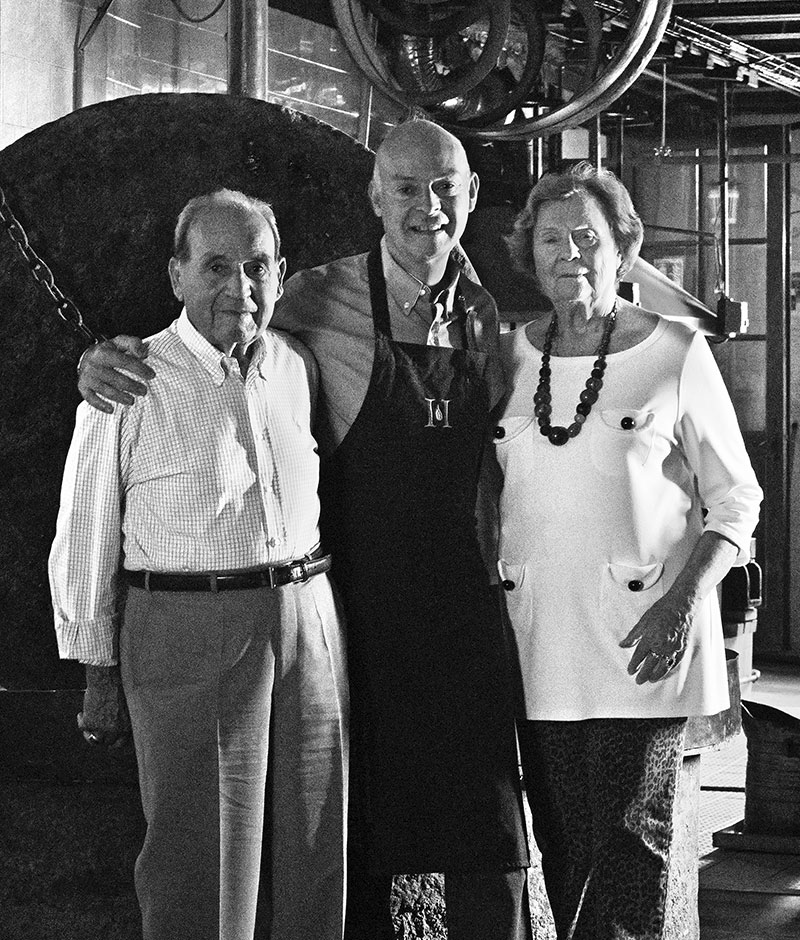 My rebirth out of the rubble demanded hours of labour. All that remained of my oil-pressing days were a mess of belts with no motor; a mere handful of dilapidated apparatus, yet with a promising future; a simple grinding stone impatient to be delivered from years of torpor. I won’t beat about the bush, I admit it, I was in bad shape. I was one of 30 mills in the region whose disappearance had scarcely even been noticed. So I had no choice, either I was destroyed or I was brought back to life. And once I was, there would be no question of showing off, designing some sports car or trying to look like a big shot; at most, Jean-Marc turned me into an instrument of emancipation, of freedom. I recall the shovelfuls of fruit measured with no weighing mechanism other than an eyeballed estimate, the more or less informed adjustments to improve on protocols in force for two hundred years, the little tricks developed to prevent my batches from meeting a sorry end. In addition to crates, I’ve collected my quota of anecdotes – those little slices of life that give you a boost and are the best antidote to despondency.

Of course, the machines haven’t forgotten the anxiety of the cash drawer or the storms of sadness. But just ask them, and you too can be plunged back into the incredible pace of work, the gargantuan effort, and above all the joy of the oil flowing out.

While following my path, I’ve observed the man who repaired me follow his own. Rather than giving me a renovation or a second youth, I was granted another mill to assist me, in Les Ardillats. It has relieved me of surplus activity, and enables our oils to travel the world. Have no fear, international success has in no way altered the affection I feel for Beaujeu and the surrounding area, the baskets everyone brings in from the garden for me to work on in my own way.

As proudly as the very first day, I take pleasure in transforming the marrows, poppies and hazelnuts that pass through my ovens, converting them into oil with the very same love. I must admit that like all retired individuals with a love of hard work, it’s difficult for me to hand in my apron: I keep going unapologetically, and for four months in every year. I’ve made the extraction of virgin peanut oil my special indulgence. A sharp nose will always pick up the toasted notes of peanut, along with the powerful aromas emanating from the empty frying pans, immediately reminiscent of freshly toasted bread or a praline-like sweetness. I don’t feel worn out by the years, but am now able to take on this role as a museum that you might have guessed at from my penchant for preserving things. I’ve done my part, and I’ve seen the Huilerie Beaujolaise family grow: it’s time for the youngster to take over and do the work for me. In a nutshell, I’m giving him my place without hiding my face; I know that he’s done his research in terms of form, and is impeccable in terms of norm.

While I still have the edge when it comes to flavour in the mouth, polished as he is, he would say that unlike me, he shines and he showers! But beware of his ideal son-in-law appearances, his more majestic dimensions: that mill has absorbed everything he learned from his ancestor, along with the very foundations of our reason for being – never cheat and stay on the straight and narrow, honour traditions and do what must be done. Between the two of us, we represent the wealth and connection between heritage and passion, between modernity and technology. In addition to the machinery custom-designed-and-built to accompany the growth of the Huilerie Beaujolaise, progress also serves as a guarantee. Moreover, the assistance provided by information technology and its various programs is less a distortion of artisan production and more a means of preserving its soul: its configuration monitors fruit pressing by the ton to the nearest Newton, and its integrated database respects cooking specifications to the nearest degree. 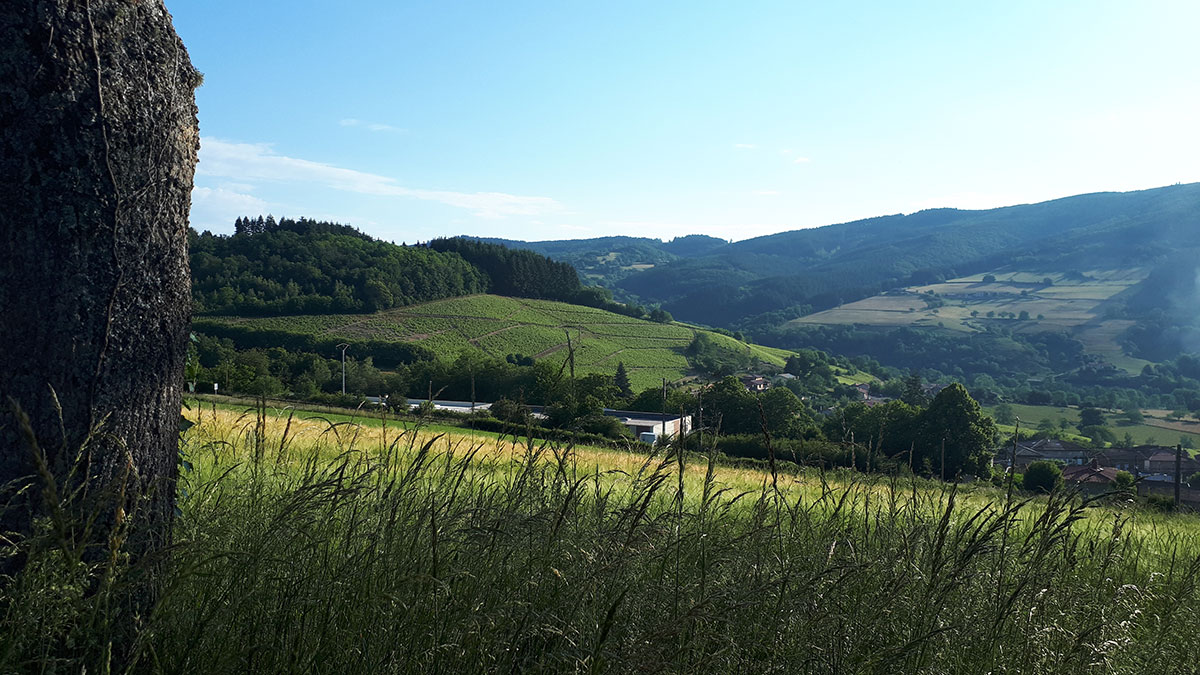 A host of recipes perpetuate a know-how consolidated through experimentation, while my successor smooths over their approximations to comply with the rules of culinary grammar. All these gains in efficiency have given him his consistency, and they enable that taste that is our very essence to be reproduced.

From you to me, obtaining a stack of certifications would be of little value, if the two of us were not able to confide just how much the pleasure of excellent work continues to be our language.